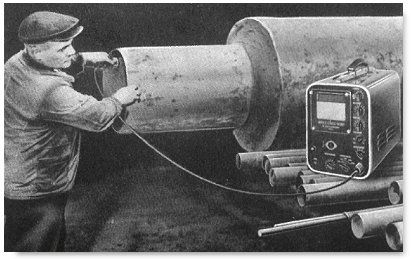 Ultrasonic technology has been around for a very long time, although it was the latest NDT technique to come into industrial use. Most of us understand Ultrasonic technology because we are familiar with it as sonar. Sonar uses sound waves in water and uses the echo return to identify submerged objects. This inspired early ultrasound investigators to explore ways to apply this concept to the medical world. This is when they started to create the early versions of the ultrasound. The first industrial application of the technology was inspired by the sinking of the Titanic. So, in 1929 a Russian named Sokolov studied the use of ultrasonic waves in the detection of metal objects and testing castings.
Although Sokolov is often seen as the father of ultrasonic testing, there were several other critical people who influenced it. In 1931 a man named Mulhauser obtained a patent for using ultrasonic waves. He did this by using two transducers to detect flaws in solids. In 1940 and 1945 men named Firestone and Simons developed the ultrasonic testing pulse-echo technique. This is just a few of the countless individuals who influenced Ultrasonic testing, but many of these people had no knowledge of each other and they worked strictly in private. Some didn’t even publish their patent applications.
Over time many more discoveries were made in ways to apply this technology and has helped to identify critical flaws easier and with more accuracy, creating a world that has a higher standard for safety.